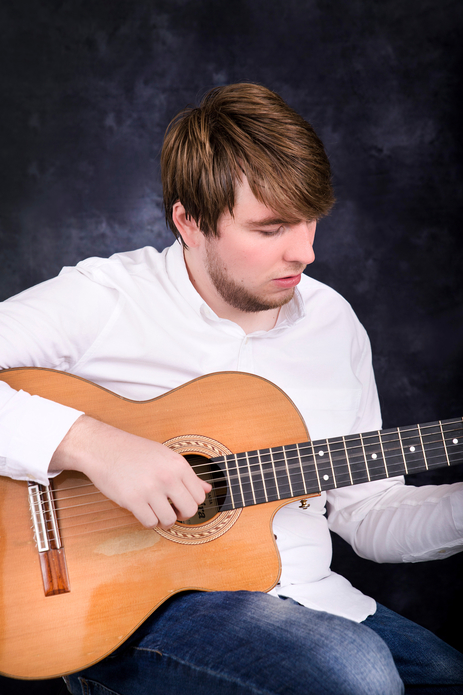 Oliver is a professional musician (guitarist) from Lancashire, now based in London, UK. He graduated with a first-class degree in popular music at Leeds College of Music in 2014. He started playing at a young age, covering a wide range of playing styles as he progressed. As a teenager, he achieved Grade 8 Distinction in both Electric and Classical Guitar.

Listening to and learning to play the music of Yes guitarist Steve Howe enabled Oliver to develop a fluid and natural technique - skills he has applied to his own playing style and repertoire.

Late 2016, John Holden contacted Oliver to play guitar on his album (Capture Light) remotely from Oliver's home studio. This was and became an album featuring an array of respected musicians in progressive rock. Notably, members and ex-members of progressive rock band Yes (Billy Sherwood, Oliver Wakeman) and the ex-singer of the band The Enid (Joe Payne). This gave Oliver the opportunity to record with musicians he regarded highly, using a variety of instruments on John compositions. Capture Light went on to be voted second best album of 2018 by Prog Mill Listeners on Progzilla Radio.

During the years he has been playing, studying and working, Oliver has gained valuable experience as a live performer, session musician and guitar tutor.

Please feel free to browse the site and enjoy the media. And don't hesitate to contact me.
Prog Magazine July 2018 (issue 89):
"When Oliver Day wandered onto the stage, picked up his guitar and began playing softly, the entire audience fell silent. We couldn't quite believe what we were hearing. If you don't know Oliver, I suggest you catch up with him while you can still afford a ticket!"
Pulse-Alternative Magazine! 2018:
"Oliver Day is a guitar virtuoso very much in the mould of Django Reinhardt. Oliver's a very expressive player with a style bordering on the neo-classical. His performance is something of a homage to Steve Howe, a love evidenced by his playing in a Yes tribute act Fragile. He's the type of guitarist who makes it look to easy as he performs Yes' 'To Be Over' and Howe's 'Sketches in the Sun' providing faithful interpretations of hard to play classics. 'Clap' from 'The Yes Album' is handled with great dexterity and is set is rewarded with rapturous applause."
John Holden 2018:
"Oliver is a super-talented guitarist; he can play anything, electric, acoustic and in any style – a producer’s dream! He was invaluable in making this album. What a future he has ahead of him!"
Music Workers Diary 2015:
"And I was taken away by his skill and the good flow of feeling in the music. It was magical. I felt mesmerised as his fingers rolled through a network universe of interconnected scales, keys, riffs, licks and melodies. Like a magician with smoke and mirrors waving the wand of a guitar. And the sounds he was making reconstructed themselves as moods as they passed from ear to brain. The ideas passing from writer to live performer to listener."

Alison's Crossbow: a musical project by Andy Warren released album "Times". Oliver Performs on all the tracks. Link. Next album 'Strip' to be released soon.

Due to the pandemic, Most of the original gigs dates for this year have been rescheduled or canceled, Please double check for new dates.
John Holden's second album released.
Ms Amy Birks Album Released.
Fragile Yes Tribute original album released.
See Discography.
2020 That Joe Payne tour, Amy Birk's Support - Oliver will be playing for both artists. All dates excerpt Birmingham rescheduled for 2021,
Ms Amy Birks - Oliver Will Be performing with Amy on several of her own shows,
Mid-year dates canceled,
Oliver Wakeman - Oliver will be performing in Wakeman's band for a show in London May 2019 (double headliner with Touchstone). PLEASE NOTE: This date is no longer going ahead and will be rescheduled.

Oliver has performed on a song from Claire Hamill's new album 'Over Dark Apples'. See Discography.

seYes tribute band will be performing at Cambridge Rock Festival on Friday 26th July, for which Oliver will be on guitar. Video.

Oliver has relocated to East London.

'Capture Light' voted No 2 in The Progmill Listeners Album Of The Year 2018 Show on Progzilla Radio.

One Night In Nashville: Oliver will be accompanying singer/songwriter Louise Setara (2018 X-Factor contestant) at this Nashville style event in Manchester on Sunday 2nd December. Tickets.

Roger Dean Art Exhibition - Trading Boundaries: Oliver is back at this fantastic venue during Roger Dean's art exhibition, performing (depping) with Yes tribute band 'seYes' on Saturday 3rd November. The band will perform epic Yes tracks 'Close To The Edge' and 'Gates Of Delirium' in their entirety, not previously performed before by Oliver live. Roger Dean's classic album art will be on display (with Rodger in attendance). Tickets.

That Joe Payne Acoustic Showcase: Sunday Matinee 27th May 2018 Oliver will be joining Joe Payne as a special guest for an acoustic performance of material from The Enid, John Holden and Joe's own music at the Northampton Picturedrome. Oliver and Joe will be joined by John Holden to perform a song from the recently released album Capture Light. Oliver will also be giving a solo guitar performance. Other guests include Nikitas Kissonas (Methexis) and Pete & Dunk. 2pm - 6pm. Tickets. More Info.
[Photos from the Acoustic Showcase]

Joe Payne: Oliver will be performing with Joe Payne (ex-The Enid / two-time voted best male vocalist in Prog Magazine) along with his band at the launch of his new debut single “I Need a Change” at the Northampton Picturedrome, 2nd March. The live performance will include songs of The Enid & Methexis. ThatJoePayne.com. Tickets.
Oliver will be playing McCrerie Guitars for this event.
[Photos from The Picturedrome]